The election's tight, so the racket is to yell "we're winning" in a loud voice till the votes are counted. (And if you have a little lung power left over, bitch about the liberal media.) We that have free souls, it touches us not, and we take our pleasures where we can. I'm enjoying the brethren's reaction to Obama'sRolling Stone interview -- especially the Ayn Rand bit:

[Obama:] Ayn Rand is one of those things that a lot of us, when we were 17 or 18 and feeling misunderstood, we'd pick up. Then, as we get older, we realize that a world in which we're only thinking about ourselves and not thinking about anybody else, in which we're considering the entire project of developing ourselves as more important than our relationships to other people and making sure that everybody else has opportunity – that that's a pretty narrow vision. It's not one that, I think, describes what's best in America. Unfortunately, it does seem as if sometimes that vision of a "you're on your own" society has consumed a big chunk of the Republican Party.

Yeah, you can guess. Let's start with Katrina Trinko, National Review's current delegate from the Youth of Today:

Sure, there’s a few libertarians who would love to abolish the safety net and slash government programs. But that’s not the party platform, or what Romney is setting out to do. Not to mention that plenty of conservatives would rather establish a safety net more concentrated, not in individuals’, but in other types of community: church, clubs, extended family.

What if Obama had faced Ron Paul or Rick Santorum? If this is your rhetoric against Mitt Romney, what the heck do you have left for those who hold positions even further right?

AKA the "hey, you should see the nutjobs we wanted to nominate" argument.

One last question: isn’t this an extraordinarily lame cover outfit/pose for the cover?

Correction --  furious adjusting his spectacles with one hand, furiously retucking his shirt with the other.

There is nothing "narrow" about Rand's vision except in that it created moral boundaries in which most of the functions of Obama's government would be seen as illegitimate, because they use threats and violence against non-aggressors to achieve social goals.

New to America, are you, Brian?

Nathaniel Branden, Rand's ideological lieutenant in the 1960s, sums up well the problem with most people trying to blithely critique Rand as Obama does. It can be found quoted on page 542 of my book Radicals for Capitalism...

Page 542! So that's why I never saw anyone reading it on the beach this summer.Hilarious as this is, it's not a patch on what the non-heavily-Koch-funded libertarians are dishing.  The Objective Standard argues with Obama's interpretation:

Rand utterly rejected the notion that one should live an isolated life. She recognized that a crucial way we “develop ourselves” and pursue our rational self-interest is by building strong relationships with other people, whether in business, friendship, romance, or any other kind of life-serving relationship. Rand wrote hundreds of pages about the virtues and benefits of collaborating with others to mutual advantage.

Makes you feel all warm and fuzzy, don't it? It's like the Garden of Eden, except that Adam, having rationally decided that the weakling Eve is just slowing him down, kills her, wears her skin for warmth, and then demands that God produce another, worthier partner for him because this is what the genius of the marketplace demands, whereupon God decides the whole thing was a horrible mistake and obliterates the universe. Ah, what might have been.But listen, it's not all deep analysis. Look at what I found at Objectivism for Intellectuals: 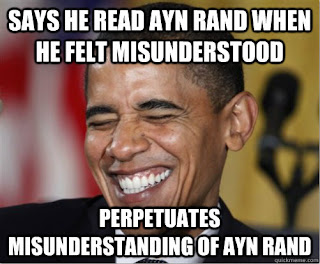 Just because they stim instead of laughing doesn't mean they don't have a sense of humor.