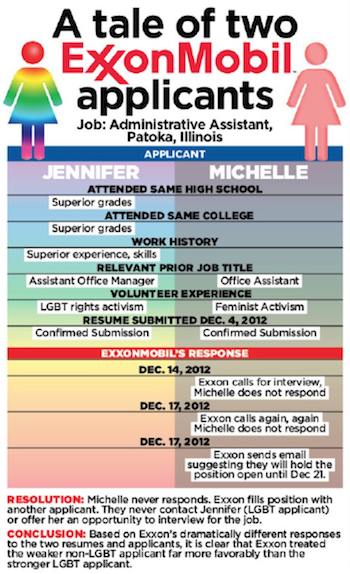 “‘Jennifer’ and ‘Michelle’ filled out applications for a job as an administrative assistant at ExxonMobil. The applications show they attended the same high school and college but ‘Jennifer’ had better grades in both schools and a stronger work history. ExxonMobil calls ‘Michelle’ for an interview — twice. She does not respond. They follow up with an email, stating they’ll hold the position for her. She does not respond. They never call ‘Jennifer’ and they hired someone else.”

Using results from all of the pairs, the study concluded that applicants who had roles in LGBT organizations were 23 percent less likely to be called back for an interview, even if they were more qualified for the position.

The debate over ENDA has pushed LGBT employment discrimination to the forefront. Americans being asked to think about LGBT rights outside of the parameters of marriage and morality (finally). With that being said, I wonder what is implied by one’s role at an LGBT organization. Beyond the assumption that one actually identifies as LGBT, I wonder if corporations consider working at an LGBT organization to pose a threat because it connotes a heightened sensitivity to LGBT issues, a stronger responsibility to seek fair and just treatment, lesser willingness to look the other way in the event that LGBT discrimination occurs, and access to individuals/groups/organizations that can support them. In other words, are companies more afraid to hire LGBT-identified people or LGBT activists who could possibly blow their spot up with LGBT discrimination cases?

I’d be interested to see some variation of this study that perhaps included cover letters. In this way some fictional applicants may be able to identify themselves as LGBT (and where they fit under the umbrella) without an organizational affiliation. Either way, employment discrimination still represents a real barrier to LGBT communities.

Sesali gets satisfaction knowing that her fellow rebel rousers are still scaring the hell out of oppressors.