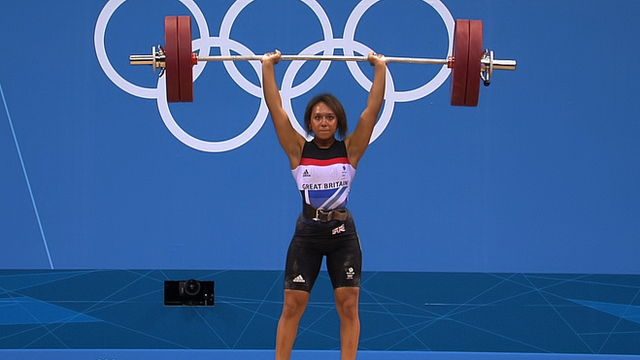 She can lift twice her body weight. She really doesn't give a fuck. (Photo via the BBC.)

Last week, after the BCC aired a documentary about British Olympic weightlifter Zoe Smith and her teammates, dudes on Twitter responded with some highly original quips about the athletes not being feminine enough. (Yep, people actually still say things like, “Now piss off back to the kitchen and make your boyfriend a sandwich he’s hungry.”) The 18-year-old Smith gave them the “verbal kicking they deserved” on her blog:

As Hannah pointed out earlier, we don’t lift weights in order to look hot, especially for the likes of men like that. What makes them think that we even WANT them to find us attractive? If you do, thanks very much, we’re flattered. But if you don’t, why do you really need to voice this opinion in the first place, and what makes you think we actually give a toss that you, personally, do not find us attractive? What do you want us to do? Shall we stop weightlifting, amend our diet in order to completely get rid of our ‘manly’ muscles, and become housewives in the sheer hope that one day you will look more favourably upon us and we might actually have a shot with you?! Cause you are clearly the kindest, most attractive type of man to grace the earth with your presence.

Oh but wait, you aren’t. This may be shocking to you, but we actually would rather be attractive to people who aren’t closed-minded and ignorant. Crazy, eh?! We, as any women with an ounce of self-confidence would, prefer our men to be confident enough in themselves to not feel emasculated by the fact that we aren’t weak and feeble.

Yes. It will never cease to amaze me that some men truly think that every woman in the public eye–whether it be politicians or Olympic athletes–should exist solely to be attractive to them. But what’s even more astounding is the fact that they really seem to believe that women actually care if random trolls on the internet want to bone them. As we well know around these parts, while the internet can be an ugly place for both women and men, women often face very gendered abuse. And the “I wouldn’t fuck you” insult is perhaps the most obvious example. It’s basically impossible to imagine a dude receiving the same type of comment.

Smith went on to break the British clean and jerk record in the women’s 58kg event by lifting twice her body weight. She hopes that if her words didn’t silence her critics, maybe her performance will. “It’s two fingers up to them, basically,” she said. “‘What are you doing with your life? I’ve just competed at the Olympics!’” Word.

Saudi woman will be competing in judo donning hijab

Faster, higher, and stronger – but no less sexist

Why doesn’t Sarah Robles, the highest ranked American weightlifter, have all the athletic sponsorships?

The Olympic Games are obsessed with policing femininity