The Romney campaign has started asking the snitch, Ronald Reagan’s question, “Are you better off than you were 4 years ago?” And partly because Obama’s advisors don’t have a ready answer, and partly because Democrats are misconstruing who’s being asked the question, it’s actually a tremendous risk for Democrats.

Before I get into why, let me caveat by saying that, at the moment, we’re not facing the kind of catastrophe we were facing in September 2008 (though that could change, depending on what happens in Europe). And Mitt’s preferred policies would exacerbate all the things I’m going to point to–Obama may not be fixing them adequately, but Mitt’s policies would almost universally make them worse.

But that’s not the response Democrats are giving to the question. Consider the way Josh Marshal answered the question: by pointing to GDP and job losses. 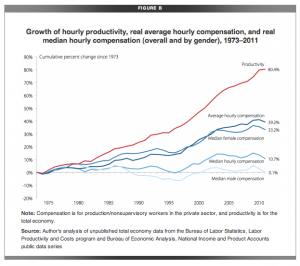 GDP, of course, measures productivity. And the last three years have continued (accelerated, actually) a long-term trend in which employers don’t share productivity gains with employees.

And while jobs aren’t being lost at the rate they were in 2008, that’s only part of the picture. First, much of the decline in unemployment came from people leaving the work force. And as a NELP report showed the other day, the jobs that have been created are disproportionately lower wage.

What this means in real terms is that many people had, but lost, a middle class job in 2008, but now have a working poor job. Is a shit job better than the middle class job they lost? The increasing predominance of lower paying jobs is just one of the reasons why median income has fallen over the last three and a half years. That trend, too, is longer term, but has continued to get worse in recent years.

And consider what else has happened in those last 4 years: people’s net worth has been gutted. That’s predominantly because of the housing crash, but its means two things when translated. First, a whopping 11.4 million Americans are underwater on their homes. That’s declining some in the last few months as prices begin to turn around, but still almost a quarter of Americans are still struggling on a monthly basis with the effects of the housing crash that the banks have been rescued from.

Then there’s the millions of Americans who have lost their home in the last four years, often after having been defrauded for thousands of dollars in unnecessary fees in the interim. Are these people–the victims of both the now bailed out banks and inept housing policy–better off than they were four years ago?

And along the way, what little savings that wasn’t a home people in both categories had has been gutted.

Is a person who had savings but just lost a middle class job four years ago better off than a person who, after having exhausted her savings and unemployment insurance finally took a dead-end job that doesn’t pay the bills but at least puts food in bellies? Cause that’s the trend we’re seeing in many places.

That’s the reality that Democrats need to face when answering this question. In many places–including swing states like NV and MI and FL, which were among the hardest hit by the housing crisis–we’ve seen a deterioration of the middle class over the last four years, that, outside of the beltway, is the lived reality for far too many people.

Now the one winning answer Democrats have is that the reason things aren’t getting better–what’s holding the recovery back–is looters like Mitt Romney. As Mitt Romney himself admitted, he is the guy replacing middle class jobs with ones that don’t pay the bills. And he’s gotten fabulously wealthy doing so.

Mitt Romney is the poster child for why things aren’t getting better, because Mitt’s entire philosophy and life history has been about not sharing the wealth but instead off-shoring it, about gutting the middle class, about continuing and accelerating the downward trend we’ve seen since the 1970s. Many people aren’t better off than they were four years ago, but that’s because people like Mitt got bailouts and instead of being patriotic, they were greedy and didn’t share.

To the extent people aren’t better off, it’s often precisely for the same reasons Mitt is better off. That needs to be the Democrats’ response.