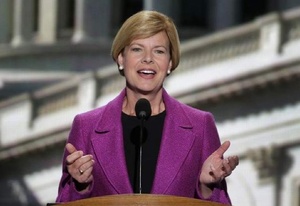 “It’s incredible being given the opportunity to shatter glass ceilings but the more important focus is making sure we are creating a path many more will follow. I might not have aspired to public office if women and openly gay and lesbian candidates hadn’t run before me and shown me that doing so was possible. I recognized when I became the first woman elected to congress from the state of Wisconsin and first out lesbian elected in the history of U.S. that that’s not enough. We need to have legislative bodies that reflect America. Being a first is an extraordinary privilege, but the battle is won when there are many.”

Woohoo! Adding onto a number of important wins for liberals, last night Tammy Baldwin became the first openly gay politician elected to the U.S. Senate. Let’s get to know this history-making lady! Here are ten things about Tammy:

2) While there has never been an openly gay or lesbian member of the U.S. Senate, Baldwin is one of four openly gay House members, along with fellow Democrats Barney Frank of Massachusetts, David Cicilline of Rhode Island and Jared Polis of Colorado.

3) Her politics place her firmly in the Liberal camp, and through her work in Congress, she has consistently stood up for The People. She’s vowed to stand up for “seniors, working families and the middle class” against “big oil and Wall Street”. As one of only a few members of Congress, Baldwin voted against repealing the Glass-Steagall Act, a Depression Era law preventing banks from engaging in high-risk investments. The repeal ending up being a major factor in 2008′s financial collapse.

4) She voted against the invasion of Iraq in 2002 and continues to speak out against the war.

5) Lisbeth Salander from “The Girl with the Dragon Tattoo” is her favorite fictional heroine.

6) Her grandmother is her favorite real-life heroine. Of the woman who helped raise her, Tammy says “she was there for me at a time in her life where she might have been enjoying her golden years. Despite the fact that she was born before women had the right to vote in 1906, she got to see her granddaughter elected to U.S. Congress. She was also a professional woman as well as somebody who devoted herself full-time to her children. She presented the model of a working woman as well as somebody who was always there whenever I needed her.”

7) She is a friend of the site! You may be wondering how I know all about her heroines and hobbies. It’s because she did a Feministing Five interview back in December of last year, when last night’s win was just a twinkle in her  eye. If there’s one thing politicians should learn from last night’s election results, it’s that showing love to the feminist blogosphere pays off

If she could choose only one feminist to join her on a desert island, it’d be Gloria Steinem. Baldwin has called the fellow Smith graduate “a heroine of mine”.

9) She’s committed to fighting against the war on women. “I think we have too many people of all ages who think the battle has been fought and won and don’t understand that we still have to keep on fighting today,” she has said.

10) She transcends identity politics. Her status as an openly gay woman translates into concrete commitment toward LGBTQI-friendly policies and activities. According to CNN, she has been heavily involved in various efforts that directly benefit the LGBTQI community: “She was a co-founder and co-chairwoman of the Congressional LGBT Equality Caucus, leading efforts to advance the Employment Non-Discrimination Act and other civil rights initiatives. She also led successful efforts in the House in 2009 to pass expanded hate crimes legislation and was the lead author of legislation to extend benefits to same-sex partners of federal employees.”