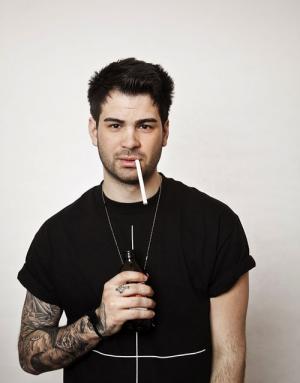 Now he’s back with a new site that is basically the same–but worse. While the user-submitted photos on Is Anyone Up included the person’s name and links to social media profiles, the new site will also include a field for exact address.

In case it was at all unclear that the point of this new feature is to allow users to physically stalk the subjects, Moore told Betabeat,“We’re gonna introduce the mapping stuff so you can stalk people.”

Well, there you go. Moore sounds pretty confident that’s a-okay, but, according to at least one cyber-law expert, it might not be. If he’s facilitating cyberstalking Moore could be violating federal criminal law–which is a problem even if all the content is user submitted.

There is nothing more boring than saying this site is awful, when Moore himself has preemptively said, “I know–it’s scary as shit.” There is nothing less satisfying than hating a dude who’s been called the internet’s Most Hated Man–and who is no doubt thrilled at the title. In the announcement for the new site, he says he “wanted to troll the lame and boring fad that soccer moms love and thats ‘bullying.’” Generally, trolls should be dealt with nothing but disdain. My outrage is a precious resource that I don’t just give away to people who are trying so hard to provoke it. And truly, Moore is such a cartoon villain–and clearly revels so shamelessly in the persona–that I can barely muster the energy.

People are terrible to each other sometimes. Some will expose nude photos of their exes, out of hurt or cruelty, with or without Hunter Moore’s site. People are often misogynistic. Some will post creepshots of unsuspecting women online for fun, or take “caps“ of underage girls they convinced to strip. “I just monetise people’s mistakes that they made,” Moore said. “But if it wasn’t me, somebody else was going to do it.” And maybe he’s right.

This is Amanda Todd, daughter of Carol and Norm. She committed suicide after being cyber-stalked and blackmailed for years by an adult man. She was 15 years old.

“I am creating something that will question if you will ever want to have kids,” writes Moore. Many people do awful things, but really, is anyone worse than the amoral troll who gleefully cashes in on the worst impulses of the internet?