It apparently is that time of year when columnists try out as speechwriters for the candidates. After Robert Samuelson tried his hand by writing speeches for both candidates in his Washington Post columnyesterday, David Brooks took a shot in drafting a debate intro for Governor Romney today. Brooks' speech is not especially truthful, but I suppose that is par for a presidential candidate.

Actually there is no reason that the next president has to "forge a grand compromise on the budget." Budget deficits were in fact quite modest until the collapse of the housing bubble tanked the economy. If the economy were back near full employment, deficits would again be quite modest. The ratio of interest payments to GDP is near its post-war low. 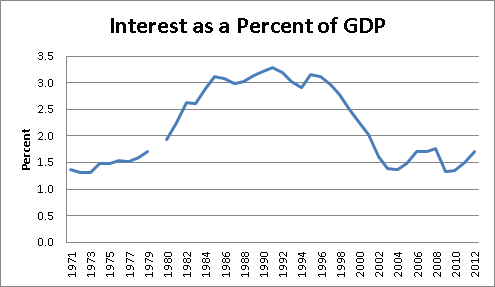 As Brooks' speech continues, he has Romney say:

"the nations that successfully trim debt have raised $1 in new revenue for every $3 in spending cuts."

So Brooks wants Governor Romney to assert with no basis in reality that the next president must have big budget cuts. This almost certainly means cuts to Social Security and Medicare (there ain't much else in the non-defense budget), but Brooks would not have Romney be this honest in his opening debate statement.

He then has Romney go into a diatribe about regulatory horror stories under President Obama:

"The Obama administration, which is either hostile to or aloof from business, has made a thousand tax, regulatory and spending decisions that are biased away from growth and biased toward other priorities. American competitiveness has fallen in each of the past four years, according to the World Economic Forum. Medical device makers, for example, are being chased overseas. The economy in 2012 is worse than the economy in 2011. That’s inexcusable."

We now know that most U.S. corporations are managed by big cry babies who are unhappy unless they are constantly told that they are wonderful people, but as a practical matter praise or criticism of the "job creators" doesn't seem to have much economic consequence. Investment in equipment and software under our Kenyan socialist president is almost as high, measured as a share of GDP, as it was in the rein of the very business friendly George W. Bush. This is especially impressive since large segments of the economy are still suffering from substantial amounts of excess capacity.

Furthermore, we have the Brooks-Romney line that:

"Medical device makers, for example, are being chased overseas."

This makes no sense. The comment is a reference to a small tax on medical devices that is being used to help finance the Affordable Care Act. The problem with the story is that the tax applies to the devices when they are sold in the United States. This means that manufacturers will not be able to evade the tax even if they move their operations overseas. Was Romney really this clueless when he ran Bain Capital?

Okay, the statement goes on, but you get the flavor. So, should Governor Romney hire David Brooks?