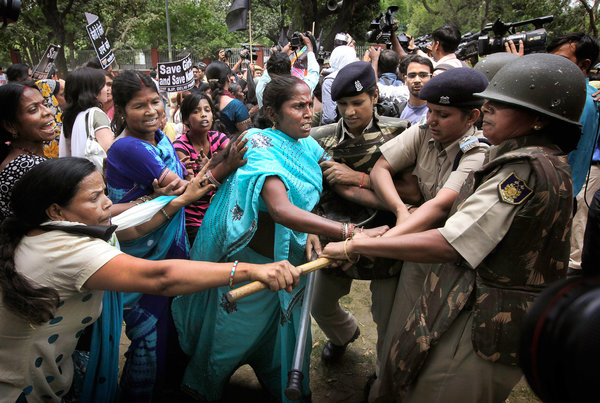 Police confronted women in New Delhi on Sunday who were protesting the rape of a 5-year-old girl. Manish Swarup/Associated Press. Via.

Horrible. New protests in India after the rape of a 5 year old.

France is set to legalize same-sex marriage and adoption, while homophobic violence is on the rise.

Is feminism on life support “with a DNR scrawled on its Botoxed brow”? Kareem Abdul-Jabbar thinks so.

The Feminist Wire is hosting a forum on Race, Racism, and Anti-Racism within feminism. Two we like: “The Tragedy of a Failed Politic” and “You Become an Anti-Racist Feminist”.

Recaps Magazine has a new issue out.

“Instead of dividing into two groups, men and women overlapped considerably on attributes like the frequency of science-related activities, interest in casual sex, or the allure of a potential mate’s virginity.” We’re trying our best not to say “we told you so” but this article is making it realllyyyyy hard.

Chloe on the revolutionary power of the song “I Touch Myself”.

Chi Mgbako has a great piece on today’s oral arguments at the US Supreme Court on the anti-prostitution pledge in PEPFAR.

Infuriating: the Steubenville football coach who allegedly covered up a rape got a contract extension.